The time has come! We’re making our own films, and I’m super excited about it! But of course, before you make the film, there’a a lot of magic that has to happen first!

So before we started I had three little concepts I’d been storing in the mind tank for a while. A collection of funny shorts about my sister Chaz, who comes up with gold like ‘I’ve realised everything I do in life I do just so I can sit down again.’ I think I’m still going to make this over the holidays, for the fun. I had another idea about a water carrier in the desert that would be a metaphor for not carrying the weight alone, and although I do still like this one, I went for the last idea, which was an idea about a girl who is struggling with a dark version of herself. Deep stuff. So Before I went ahead, I did a bit of research, to get more of a strong idea about the concept.

I started by doing a little something that I love; going to the library, and reading some of the amazing books they have in there! I think I might start doing this before every project, it’s helped me loads this time. Here are the books I was reading, I highly recommend them if you’re an animator/draw-er of any kind… 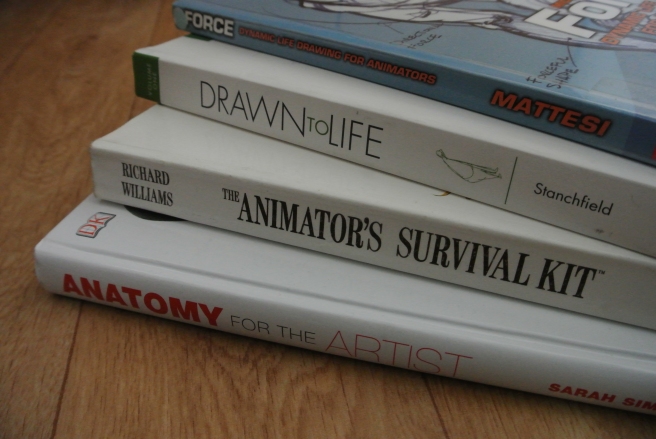 ‘Force’ helped me to improve my life drawing (and hopefully animating too!) by making me focus on the line of action and force of the character over anything else. This makes the drawing more gestural and expressive, which is super important! ‘Drawn to Life’ and ‘The Animator’s Survival Kit’ both helped me to further my knowledge of animation by helping me apply character and expression to the basics. ‘Anatomy for the Artist’ helped me when constructing my character, because it helped me understand how my character will move, and how she works in 3D.

I also decided to watch some short 2D animated films, to give me some ideas and inspiration. Here are some of my favourites, should you wish to gander at them;

‘Thought of You,’ by Ryan Woodward; https://www.youtube.com/watch?v=OBk3ynRbtsw

All of these films were SUPER inspiring to me, in the way they pushed traditional animation in different ways. I love the simple yet beautiful narrative and animation in ‘Duet,’ the flowing animation and simple structure of ‘Thought of You,‘ the boiling line and exaggeration in ‘Body Beautiful,’ and the grungey style of ‘Matter Fisher.‘ All of these films definitely got me thinking about the way I wanted to create my own!

Finally I took to the trusty Pinterest to help me with gathering inspiration in terms of style, imagery, and even story ideas. Here’s my board if you fancy having a look;

Gathering this imagery really helped influence my ideas; I found a lot of expressive movements, facial expressions, and concept ideas that helped me understand my own idea, and what I wanted to do.

From this research, I decided I wanted to make a film about a girl who was trying to escape from a darkness within herself, but realises that the darkness can’t be escaped, and she must embrace it in order to move on. I wanted the film to be accessible to anyone, so I kept the darkness undefined, so people can interpret however they like; a struggle, mental illness, a dark secret or past, or even just your true feelings. By keeping the theme universal, it will be able to be understood by many more people. I also decided I wanted to keep the film traditional, and animate on paper, allowing me to be more expressive and to use different materials, such as charcoal, to get the emotion across more successfully.

So now the time came around to actually get started, and to draw out some ideas! The first lot of character designs I did made the character look much too young and happy;

So I had to tone it down a bit! I focused on the main features I liked about her; the pointy, slightly longer face, and big expressive eyes. Here’s the character I was finally happy with;

I named her Emily! The one on the left is the ‘light’ version, and the one on the right is her ‘dark’ inner self (although none of the characters are ‘good’ or ‘bad’). After I got her looks down, I went onto construction, which is where that anatomy book came in handy! Here’s some construction of her skull I found particularly useful, especially with the 3/4 facial turnaround;

It’s super important to understand the construction of your character I have learnt, because this is how you’re going to know how she looks at different angles, how she fits into poses, and how she actually moves! Which is why I spent quite a long time on this stage this time; I wanted to fully understand her. I constructed facial turnarounds in basic, 3D, and finalised forms, and the same for the whole body. But now I feel like I’m ready to animate her, so it was well worth it;

So now the technical part was all done, it was time for all the flashy stuff, like poses and expressions! I wanted to convey the idea that Emily was vulnerable, afraid, and trying desperately to escape, whereas ‘dark’ Emily was hopeful, and accepting. I tried to get these ideas across in their poses and expressions;

I used a glow on Emily and inverted the black pencil line to give her a look of innocence and vulnerability, and I darkened the line of ‘dark’ Emily and added a level of noise to make her seem darker, which is how Emily sees her.

Once I’d finished all the character stuff, I went onto look at my story again. At one point, the story involved other characters and was more of a traditional narrative, but this wasn’t really working with the more abstract idea of having two Emilys. So I went back and changed it completely into a story that was more symbolic, and only involved the two Emilys, battling inside Emily’s head. After a bit of changing it around, I was finally happy with an idea that involved four main parts; Emily trying to rip D.E. out of her body, D.E. being freed and trying to comfort Emily, Emily running away, and finally Emily accepting her dark half, and so being able to move on.

Here’s some of my final storyboards; 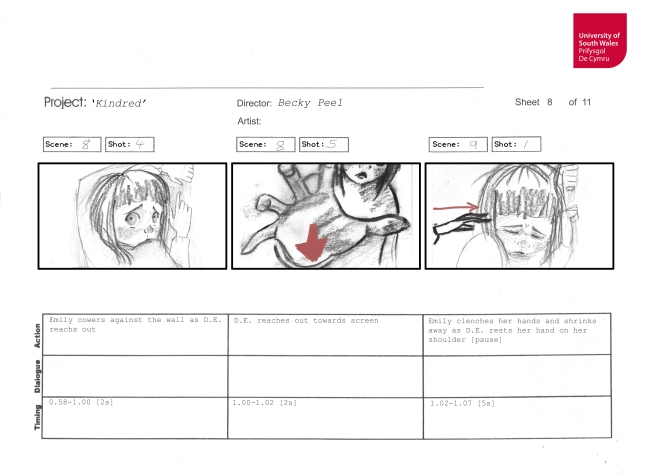 And finally, I did a little ‘in-situ’ illustration of the characters, of what they would look like in the finished film. It was at this point I also decided that a conventional background just wouldn’t work, it takes them out of place and makes the story more confusing. So I had to stick with a simple gradient that suggested a floor, just so the characters didn’t look like they were floating in space. Also I stuck with a blue/grey background, to give that sense of sadness that both characters are feeling. It also allows both the white and black lines to be picked up easily, so I thought it worked well. Here’s the finished piece;

So that’s the pre-production FINISHED! I’ve decided to name the film ‘Kindred,’ representing the two halves of Emily that belong together, even if she doesn’t realise it yet. And now, time to ANIMATE!